13th INTERNATIONAL MARCH FOR THE FREEDOM OF OPPRESSED MINORITIES AND PEOPLES 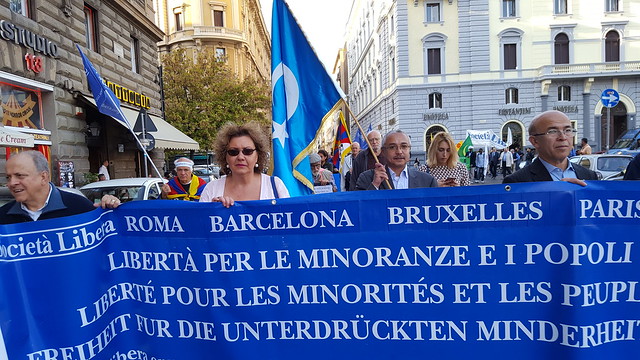 Società Libera, a nonpolitical Association for Liberal culture, has been promoting the International March for the Freedom of Oppressed Minorities and Peoples for 13 years, in order to denounce the deprivation of fundamental freedoms and the difficulties to achieve self-determination for hundreds of millions people

The March has been held in Rome and, for some years, simultaneously in Paris, Berlin, Brussels and Barcelona; in the last three years it has been held in Campagnano, in partnership with the local Municipality. With the hope of supporting the development of open societies, where everyone can realize their aspirations, and where States and monopolies become less invasive, we believe that Human Rights must still be supported. The defense of Freedom cannot be but global, as its need is felt in a quarter of the countries of the planet.

We can mention China, that systematically represses the Tibetan, Uyghur and Mongolian minorities and is promoting a neocolonial policy in Africa with a reckless use of the environment; the one party regime in Laos and Cambodia, the denied religious freedom in Vietnam, the repression of the Harratin minority in the South of Algeria, Morocco and Mauritania, the denial of fundamental rights for the Indios, Kurds and Sudanese; Christian minorities that are massively prosecuted; Hong Kong’s autonomy and its precarious future because of Beijing’s rigid attitude.

Having these purposes in mind, together with the Communities of exiled oppressed peoples, Uyghurs, Tibetans, Venezuelans, Iranians, Vietnamese, we wish to sensitize governments and public opinion.

We need significant and effective signals from Western institutions, stating the respect of Human Rights not only with declarations of principle.

Let us testimony our commitment gathering at the Sanctuary of Madonna del Sorbo, on the Via Francigena, a route symbol of the freedom of Peoples. Let us try to shake public opinion, institutions and communications, let us transform the yearly appointment into a signal for the Peoples of Europe